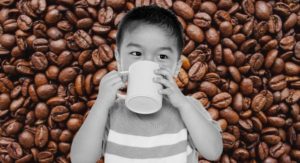 Spend an afternoon hanging out in a Starbucks or Dunkin, and you’ll probably see a handful of teens—and maybe even some younger kids—stopping in for a cup of coffee. A 2017 industry report from the National Coffee Association found that the percentage of Americans aged 13 to 18 who drink coffee every day had risen to 37%, marking a 14-percentage-point increase since 2014.

The image of a 13-year-old drinking coffee seems somehow wrong—a child enjoying an adult’s habit. But there’s actually a lot of good in it. Recent studies have found that coffee consumption may lower a person’s risk for heart disease and early death. While coffee was once vilified, the prevailing wisdom these days is that if it isn’t messing with your sleep, it’s pretty much all upside. Research has also found that coffee contains several antioxidant compounds, including polyphenols, that seem to have healthy anti-inflammatory effects.

II – Have Your Say
1. Some of today’s most-popular coffee drinks contain a lot more than just coffee. Sugar is a featured ingredient in many of the proprietary latte and cappuccino offerings at popular coffee chains. What would you recommend instead, for young people to drink?
2. Some recent reports have found that adolescents today are sleeping less than they used to. Is coffee the only culprit? Energy drinks contain caffeine, and social media & screen time are also seen as factors.
3. Let’s walk down memory lane: how was your teenage lifestyle as compared to now?
687 Should Parents Worry About Kids Drinking Coffee?

The Bill and Melinda Gates Foundation announced Wednesday it will donate $50 million to help fight the Ebola outbrea...

Talking is usually a breeze—so much so that it's hard to go an hour without finding yourself yammering about s...

The holidays can be the most wonderful time of year, but also the most stressful. Whether it's a family member or...

Negativity can creep into our brains. Whether it's every once in a while or almost all the time, negative thought...

Labor union IG Metall secured an unprecedented deal to give a large portion of its 2.3 million members more flexibl...

Many aspects of life will likely never return to normal after COVID-19, but here's how flying will be changed foreve...
686 Why You Really Shouldn’t Kill the Spiders in Your Home, According to an Entomologist
688 Botox Alternatives That Will Get Rid Of Your Wrinkles
Home
Speech Materals