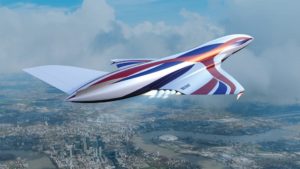 Flight times from London to Sydney could be 80% shorter by the 2030s, should a hypersonic rocket engine being developed in the UK get off the ground.

The UK Space Agency announced Tuesday at the UK Space Conference 2019 that it would be working more closely with the Australian Space Agency in an agreement dubbed a “world-first Space Bridge.”

The Synergetic Air-Breathing Rocket Engine (SABRE) engine, from Oxfordshire-based Reaction Engines, looks to be the jewel in the crown of this new enterprise.

“When we have brought the SABRE rocket engine to fruition, that may enable us to get to Australia in perhaps as little as four hours,” said Graham Turnock, head of the UK Space Agency.

“This is technology that could definitely deliver that. We’re talking the 2030s for operational service, and the work is already very advanced.”

II – Have Your Say
1. What was the longest flight you’ve ever experienced? How did you cope?
2. What do you think are the challenges of hypersonic flights?
a. Safety
b. Cost
c. Sound and other effects human body
d. Environmental issues
2. When it comes to air transport, which technologies are you looking forward to?
a. Air taxi
b. Drones
c. Electric aircrafts
d. Others

439 Tokyo’s future skyline could include a mile-high skyscraper

Rising like the Emerald City is a building that will not only dwarf the world's tallest skyscraper -- the Burj K...

633 7 Ways To Keep Your Brain Healthy, According To Experts

Being active and eating well helps keep your body healthy, but these habits can also aid in keeping your mind sharp....

202 Gastronomic voyeurism is the latest craze in South Kore

WATCHING someone eat food via webcam is the latest craze in South Korea. A report by Reuters suggests this gastron...

You might want to remember these 13 surprising and strange laws next time you're traveling to avoid embarrassment, f...

The concept seems relatively innocuous. Get a burst of energy by drinking something out of a colorful can that looks...

Using money to free-up time is linked to increased happiness, a study says. In an experiment, individuals reporte...
692 Self-Care Is Not Selfish
694 Why not wearing shoes does a body good
Home
Speech Materals