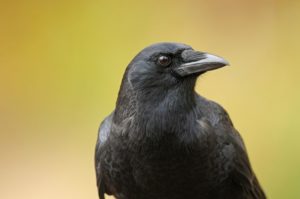 Intelligence runs in the crow family, a diverse group of more than 120 bird species. And, as with most genera, crows and their relatives tend to be misunderstood.

Known as corvids,they are incredibly clever overall, with the largest brain-to-body-size ratios of any birds, but those in the genus Corvus tend to be especially brainy. This genus includes the crows, ravens, rooks and jackdaws, accounting for about a third of all corvid species. Many of these have a brain-to-body-size ratio you’d expect from an ape, not a bird. In fact, according to one study, “the crow brain is the same relative size as the chimpanzee brain.”

Humans have long recognized the craftiness of crows and ravens, as seen in centuries of folklore casting the birds as thieves, tricksters, problem solvers, wise advisors to gods or even deities themselves. Yet we also tend to stereotype these birds, overlooking many of their complexities to brand them as spooky, troublesome or outright nefarious. Fortunately, our appreciation of their intelligence has soared in recent years, thanks to research exploring what corvids can do with all that brainpower. Below is just a sampling of what we’ve learned about their mental and social lives, focusing mainly on crows but also including ravens and other relatives:

1. Crows have shrewd ways to get food.
2. Crows don’t just use tools; they also make them.
3. Crows can solve puzzles on par with human kids.
4. Crows hold funerals for their dead.
5. Crows gossip, hold grudges and know who you are.
6. Crows mate for life, but they’re also ‘monogamish.’
7. Young crows may stay home for a while to serve as ‘helpers.’

II – Have Your Say
1. Which facts about crows are well known in Japan? Do you have some beliefs regarding crows?
2. “Crow invasion” has been an issue all over Japan. Where do these crows come from?
3. What measures has been done to tackle crow problems in your area? What can you suggest to keep these crows at bay?

At the end of June, the “Consumer Protection Working Group,” composed of various influential figures who serve as a...

The American workplace is grueling, stressful and surprisingly hostile. So concludes an in-depth study of 3,066 U...

The Philippines' top court has delayed implementation of a controversial law providing free access to contraception...

Pot-bellied, short, or abusive traffic policemen will be barred from working on the streets of Vietnam's capital a...

Labor union IG Metall secured an unprecedented deal to give a large portion of its 2.3 million members more flexibl...
696 How to find a hobby (and why you should)
698 The planet is getting so hot, we’ll soon be wearing air conditioners
Home
Speech Materals