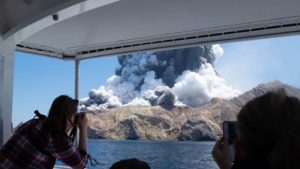 The deadly eruption of a New Zealand volcano has drawn a spotlight on how active volcanoes draw crowds of tourism each year.

With so many active volcanoes on the planet, tourists are seeking out thrills on mountains from Japan to DR Congo.

Some of those have had eruptions in the recent past but still – or possibly because of that – are high up on the list of visitors.

“Getting close to volcanoes offers a rare opportunity to experience the power of the restless earth: the smouldering, seething release of pressure from the brittle crust of earth caused by the crush of tectonic plates,” says travel journalist Simon Calder.

“But with the reward comes a range of risks. They can include sulphur dioxide and other toxic volcanic gases, material from the volcano being thrown out, lava flows and possible resulting wildfires, landslides and, for coastal locations, tsunamis.”

II – Have Your Say
1. Japan is known to have active and extinct volcanoes. Which volcanoes in Japan are mostly frequented by tourists? Do you think they are safe to visit?
2. Have you trekked on volcanic areas? What kind of satisfaction do you think people get from visiting such high risk volcanic tours? Should this type of tour be prohibited?
3. What adventures would you rather experience or have experienced? What are the thrills and risks of such adventures?
a. Hot air balloon
b. Great Barrier Reef
c. Climb Mt. Everest / Mr. Fuji
d. Trek the Great Wall of China
e. African Safari
f. Waterfalls
g. Sand surfing

706 Volcano tourism in the spotlight after New Zealand eruption

One of the world's top universities is taking a smoking ban a step further this week, as Stanford University prohibi...

Going out for sushi seems like a pretty good choice when your other options are burgers or pizza. But is it really a...

157 Religion could disappear by 2041 because people will have replaced God with possessions, claims leading psychologist

Religious people in many developed countries will be a minority by 2041, according to one Irish biopsychologist. ...

Everyone has memories of toys they loved playing with as a child. It might be building blocks or a train set, a d...

When a child is scared of dogs, strangers or grandma's creepy basement, it's natural for a parent to shield him or ...