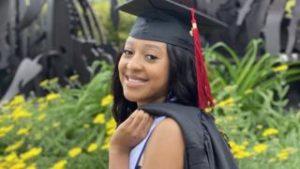 The American dictionary Merriam-Webster is to change its definition of the word racism after receiving an email from a young black woman.

Kennedy Mitchum, a recent graduate of Drake University in Iowa, suggested that the definition should include a reference to systemic oppression.

An editor then responded, later agreeing to update their definition.

The decision comes amid international anti-racism protests after the death of George Floyd in Minneapolis.

Floyd died after a white police officer held a knee on his neck for nearly nine minutes.

Ms Mitchum had encountered people pointing to the dictionary to prove that they were not racist because of the way they felt towards people of colour. She felt the definition needed to reflect broader issues of racial inequality in society.

I – Word Understanding
Racism – racial prejudice or discrimination
Systemic oppression – refers to the mistreatment of people within a specific group, supported and enforced by the society and its institutions.

II – Have Your Say
1. What do you know about the George Floyd story and the protests that came after?
2. Do you think there are differences between humans depending on the colors of their skin? What would our society look like if there were no races at all?
3. Historically, has there been any issue of racism in your country? How about in the present?
4. Discrimination happens not only in race, but in many other categories. What can the government, schools and the society in general do to remove discrimination on the following:
a. Race
b. Gender
c. Age
d. Economic status (rich vs poor)

573 Japanese Food Can Help You Live Longer: What Are The Health-Boosting Ingredients?

Experts believe that Japanese food can help you have a healthy life, and according to the London-based nutritionist ...

The U.S. government has obtained a top secret court order that requires Verizon to turn over the telephone records ...

040 Pay-as-you-weigh airfares the ‘next step’

The head of Samoa Air has defended its policy of charging passengers by their weight, arguing such a system is not ...

278 The Ice Bucket Challenge: How did it all start and what is it in aid of?

It is the spine-tingling and teeth-chattering challenge that has swept the world and raised millions for good causes...

704 Why Cold Weather Makes Us Sick

The public is slowly gearing up to protect themselves from the cold weather since the winter season is coming and te...
743 How face masks affect our communication
745 How Sweat Affects Your Skin Health
Home
Speech Materals