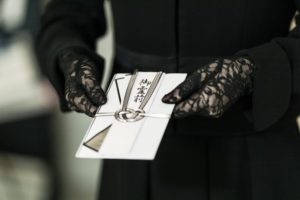 However, funerals have been noted to be on a sharp decline in Japan in recent decades, and Hiromi Shimada, a Japanese specialist of religion and writer of a bestseller titled Funerals Are Not Necessary, has observed the three main reasons as to why more Japanese people are traditional funeral practices.

The first reason is related to cost. Japan has the most expensive funerals in the world, at least five times the average of the United States’ funeral costs.

Secondly, traditional funerals have been smaller in sizes, limited to family members and/or close friends of the deceased only.

Lastly, there’s a drop in company-sponsored funerals, leaving funeral costs up to individuals and their families.

II – Have Your Say
1, In your own words, please describe the funeral rituals, traditions and beliefs in your country / area.
2, When was the last time you attended a funeral? Was it a large or a private ceremony?
3, Have you ever heard of DIY Funeral KIt by Tsubasa (Nagano Pref)? What are some known cheaper funeral alternatives in Japan?

If you work in front of a computer all day, you're familiar with that irritated, fuzzy, and tired feeling yo...

004 Police beat a woman in India

A woman was returning from a wedding in India when she was sexually harassed by a group of taxi drivers. She says th...

It is said that a man’s home is his castle - but he could soon be presiding over a 3D-printed bungalow. A company...

"Hobby" seems like a word from another time. The dictionary defines it as "An activity done regularly in one's le...
769 Shinrin-Yoku: The Japanese Art Of Forest Bathing
771 Want to study better? Just two minutes of exercise beforehand could help
Home
Speech Materals