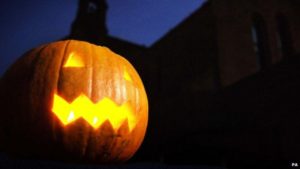 Halloween began as the festival of Samhain. It was part of the ancient Celtic religion in Britain and other parts of Europe. At the end of summer, the Celts thought the barrier between our world and the world of ghosts and spirits got really thin. This meant weird creatures with strange powers could wander about on Earth.

The Celts had a big party. It was all about scaring away the ghosts and spirits. Later, with the Christian religion, the day became known as All Hallows’ Eve – the day before All Saints’ Day on 1 November.

It’s in America that Halloween has really taken off. Irish immigrants to the United States raised the popularity of Halloween during the 19th century. During the 20th century it became more and more popular, with traditions like pumpkin carving and trick or treating becoming part of TV shows, books and movies.

I – Word Understanding
Samhain (sah-win) – a festival of the ancient Celts, held around November 1 to celebrate the beginning of winter.
Celts (kelt) – Tribes originating from central Europe.

II – Have Your Say
1, How is Halloween celebrated in your area?
2, What traditional celebration/festival in Japan would you say resembles Halloween?
3, Do you think Halloween should not be celebrated due to the pandemic? What restrictions does your government implement?
4, If you are to host an online Halloween party, what activities would you do?

773 The history of Halloween – how it all started

395 Brain Scans Reveal Why Eye Contact Is Necessary For Socialization: Look Into My Eyes

Gazing into the eyes of a loved one, friend, or complete stranger is a natural instinct, and one brain scans can n...

715 Japan to amend laws to help elderly work until 70

The Cabinet on Tuesday approved bills to urge businesses to let employees work until age 70, as the country seeks to...

238 Now You See Me: How To See Without Glasses

Coke bottle eyeglasses and delicate contact lenses both accomplish the same task: They help you see. But what if you...

The number of stalking cases reported to police in 2013 exceeded 20,000 for the first time, reaching a record high 2...