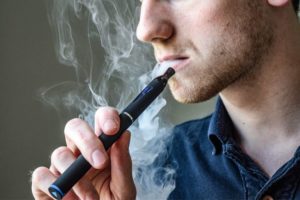 The Centers for Disease Control and Prevention (CDC) and the Food and Drug Administration (FDA) are investigating a “cluster” of severe lung illnesses that the agencies believe are linked to e-cigarette use. Since Sept. 26, the CDC has identified 805 cases in 46 states and 1 U.S. territory. At least 12 people have now died from the illness.

More than half of the people who have become sick are under the age of 25, with 16% younger than 18. Nearly three-fourths of the patients are male.

The agencies are investigating the exact cause and whether the illnesses are linked to specific devices, ingredients or contaminants. Presently, the cases don’t appear to be linked to one product or substance, the agencies said, although they noted that in “most” cases, patients had reported using THC and nicotine.

II – Have Your Say
1. More than 500 people have become sick from a mysterious vaping-related lung illness and several people have died. How common is vaping in your area and where do you see people vaping?
2. In the US, several states are pushing for a legislation banning the sale of flavored e-cigarettes which highly appeal to young users. How likely are young people in Japan to use e-cigarettes? Is there a need for Japan’s government to control this?
3. Several people use e-cigarette to quit smoking. What alternatives do you suggest for those who want to quit smoking?

690 What we know about vaping-related lung illness

Color has the power to evoke emotion, stimulate appetite, and even make babies cry. The psychology of colors goes we...

Up to 7,000 people begin tests for hepatitis and HIV after being treated at dental clinics accused of re-using need...

Caleb Harper, founder of the CITYFarm Research Project, and his team at MIT’s Media Lab in Cambridge, Mass. appear...

North Korean hackers are capable of attacks that could destroy critical infrastructure and even kill people, a h...

Japan's first "naked restaurant" opens in Tokyo next month with draconian rules of entry -- podgy prospective di...
689 Here’s What Young People All Over the World Say They Want Most in a Partner
691 6 amazing benefits of garlic
Home
Speech Materals