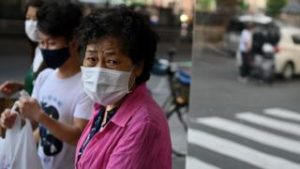 Why haven’t more people in Japan died from Covid-19? It is a macabre question that has spawned dozens of theories, from Japanese manners to claims that the Japanese have superior immunity.

If you were to listen to Deputy Prime Minister Taro Aso, it is down to the “superior quality” of Japanese people. In a now notorious comment, Mr Aso said he had been asked by leaders of other countries to explain Japan’s success.

“I told these people: ‘Between your country and our country, mindo (the level of people) is different.’ And that made them speechless and quiet.”

Literally translated, mindo means “people’s level”, although some have translated it as meaning “cultural level”.

It is a concept dating back to Japan’s imperial era and denotes a sense of racial superiority and cultural chauvinism. Mr Aso has been roundly condemned for using it.

But there is no doubt that many Japanese, and some scientists, think there is something about Japan that is different – a so called “Factor X” that is protecting the population from Covid-19.

It is possibly relevant that some aspects of Japanese mores – few hugs and kisses on greeting – have in-built social distancing, but nobody thinks that is the answer.

II – Have Your Say
Did Japan got smart? or got lucky? Despite Japan having the highest number of elderly per capita and no lockdown, there is growing scientific evidence that Japan has contained the spread of Covid-19 so far. Let’s discuss the following theories related to this:

An Education Ministry sub-committee on education reform set up by the government has recommended changing the way te...

Nestle has recalled four varieties of Kit Kat Chunky bars after pieces of plastic were found by seven people. Th...

326 Richest 1% to own more than rest of world, Oxfam says

The wealthiest 1% will soon own more than the rest of the world's population, according to a study by anti-poverty...

The Bill and Melinda Gates Foundation announced Wednesday it will donate $50 million to help fight the Ebola outbrea...

Drinkable chocolate has been used for years to treat ailments and maladies. When chocolate made its way to France i...

719 Reasons Why You Should Have A Health Journal

If you have started 2020 with a resolve to improve physically and mentally, then it is a must that you have a health...
751 Can you train yourself to like foods you hate?
753 Cooking Therapy Benefits That Will Surprise You
Home
Speech Materals