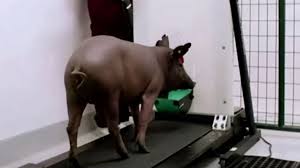 Billionaire entrepreneur Elon Musk’s neuroscience startup Neuralink on Friday unveiled a pig named Gertrude that has had a coin-sized computer chip in her brain for two months, showing off an early step toward the goal of curing human diseases with the same type of implant.

Co-founded by Tesla Inc and SpaceX CEO Musk in 2016, San Francisco Bay Area-based Neuralink aims to implant wireless brain-computer interfaces that include thousands of electrodes in the most complex human organ to help cure neurological conditions like Alzheimer’s, dementia and spinal cord injuries and ultimately fuse humankind with artificial intelligence

“An implantable device can actually solve these problems,” Musk said on a webcast Friday, mentioning ailments such as memory loss, hearing loss, depression and insomnia.

I – Word Understanding
Unveiled – showed / announced
Interface – a device or program enabling a user to communicate with a computer.
Electrodes – a conductor used to establish electrical contact
Neurological conditions – diseases that affect the brain, spine and nerves
Fuse – to connect

II – Have Your Say
1, Millions of people are affected by neurological conditions. Let’s discuss what you know of these conditions. How do you think Neuralink could help?
a, Parkinson’s disease
b, Stroke (brain attack)
c, Dementia
d, Seizures
e, Headache
f, Paralysis
2, Neuralink team said they also would like to see the technology permitting the uploading of memories for later use. What kind of memories would you like to save for later upload? Do you think this technology can also be useful for people who want to forget traumatic experiences? What other uses could we possibly gain from this technology?
3, Beyond medical use, Neuralink also hopes to make an AI extension of our brains to make sure humans stay superior over computers. How do you imagine life would be with AI becoming more intelligent than ever? And what could AI extension do for us?
4, For what reason are you willing to have a brain implant, health or intelligence?

The number of stalking cases reported to police in 2013 exceeded 20,000 for the first time, reaching a record high 2...

Women who want the Kingdom of Saudi Arabia to lift a de facto ban that prohibits them from driving have launched a...

213 The Right Way to Motivate Employees

It’s one thing for a CEO to be passionate and enthusiastic, but there’s a line of professionalism that must always b...

With the speed of innovation in the tech industry, we can't know every piece of technology that will fill our every...

605 Five numbers that will define the next 100 years

After years of controversy surrounding the treatment of its factory workers, Apple decided Thursday to eliminate the...
761 The Swedish staycation obsession
763 These planter-like urinals are Amsterdam’s answer to the problem of ‘wild peeing’
Home
Speech Materals