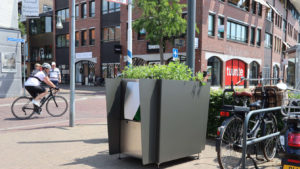 At first glance, the urinals — called GreenPees — look like traditional planters, with greenery sprouting from the top. But look more closely and you’ll notice an opening in the side. This is the target zone for urination.

The GreenPees have many benefits, according to De Vries, from protecting historical buildings from the corrosive effects of urine, to reducing water use compared with traditional toilets.

The planters also effectively green the city, attracting bees and other insects, he added.

And all that urine doesn’t go to waste. GreenPee produces organic fertilizer and water, which can be used to feed and water the city’s green spaces, says De Vries.

Alexei Chumachenko, the head of Saratov State University in central Russia, has asked his employees and students to ...

Up to 7,000 people begin tests for hepatitis and HIV after being treated at dental clinics accused of re-using need...

"Do you ever feel like your mind is one big, infinitely scrolling, incredibly cluttered to-do list? And are you alwa...

427 Why your boss shouts and screams: Researchers say it could be because they are ethical

If your boss is pleasant one day, but lashes out the next, they may suffer from a phenomenon known as moral licensin...

The BBC has revealed how it plans to mark the centenary of World War I. Programming and events will span four ye...