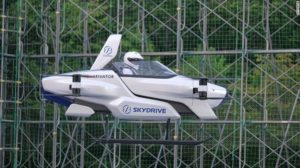 A Japanese company has announced the successful test drive of a flying car.

Sky Drive Inc. conducted the public demonstration on August 25, the company said in a news release, at the Toyota Test Field, one of the largest in Japan and home to the car company’s development base. It was the first public demonstration for a flying car in Japanese history.

The car, named SD-03, manned with a pilot, took off and circled the field for about four minutes.

“We are extremely excited to have achieved Japan’s first-ever manned flight of a flying car in the two years since we founded SkyDrive… with the goal of commercializing such aircraft,” CEO Tomohiro Fukuzawa said in a statement.

“We want to realize a society where flying cars are an accessible and convenient means of transportation in the skies and people are able to experience a safe, secure, and comfortable new way of life.”

II – Have Your Say
1, Do we really need flying cars? What for?
a, Minimize air pollution
b, Frees up roads to give way to pedestrians and cyclists
c, Shorter distances for same journey
d, Less need for roads and highways
2, What challenges do you think we will encounter with flying cars?
a, Safety
b, Cost
c, Noise
3, LImited number of passengers
What would make you choose a flying car over other forms of transportation? Do you have another idea for a better transportation system?

014 Six of the world’s seven billion people have mobile phones… but only 4.5billion have a toilet says UN report

Six of the world's seven billion people have mobile phones - but only 4.5 billion have a toilet, according to a U.N...

Drinking eight glasses of water every day is one of the most important health habits we always try to instil and gro...

266 Why bad news dominates the headlines

When you read the news, sometimes it can feel like the only things reported are terrible, depressing events. Why doe...

Think you can continue to work as you age? The answer may depend on your profession. People in so-called blue-col...

Intelligence runs in the crow family, a diverse group of more than 120 bird species. And, as with most genera, crows...

117 Surprising new research reveals that being HAPPY makes you FAT

A study published last month found that if you are the kind of person who lets your mood affect your eating - that'...
763 These planter-like urinals are Amsterdam’s answer to the problem of ‘wild peeing’
765 Tokyo hotel offers free stay, drinks, and sashimi on one very simple condition
Home
Speech Materals