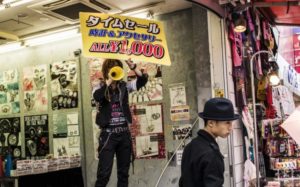 Despite Japan’s international image as a country of serene temples and quiet gardens, according to a 2018 report by the World Health Organization, Japan is the noisiest country in the world.

To prevent negative effects, the WHO recommends avoiding being exposed to noise over 53 decibels. The legal average limit in Japan is about 70, a number based on data 50 years out of date, according to Prof Matsui of Hokkaido University who spoke about the problem in an NHK feature on noise pollution in Japan.

While the WHO’s numbers are likely to be a bit skewed due to the vast size of Japan’s major cities and the presence of several noise-creating airbases, there is definitely more than a grain of truth to this decibel-intense soundscape.

II – Have Your Say
1. Noise pollution in Japan’s cities: are you aware how noisy they are?
a. Alerts and warnings
b. Sales people screaming out deals
c. Stores’ background music
d. Seasonal campaigning
e. Thin walls
f. Train stations
g. Tourists
2. Concerns about noise pollution are rising with noise coming in as one of the top reasons citizens complain to the Environment Dispute Coordination Commission, a government organization that oversees environmental disputes. Is there any way noise can be controlled? What is your government doing about it?

The U.S. Food and Drug Administration has approved an at-home colon cancer test. Called Cologuard , it is the first ...

Explorers throughout history have searched for the legendary fountain of youth. And while the elusive fountain has y...

375 What Americans Fear Most, According to Their Google Search Histories

When you’re a human, there are so, so many things to be scared of. Poisonous spiders. Snakes. The idea that nobody...

In the future, people may be able to do medical check-ups from home instead of going to the hospital. Smartphones...

In Kuwait City's Sulaibiya area every year gigantic holes are dug out out in the sandy earth and filled with old ty...
683 How To Achieve Personal Happiness
685 Skin Care Shocker: Woman In Semi-Comatose State After Using Contaminated Cream
Home
Speech Materals