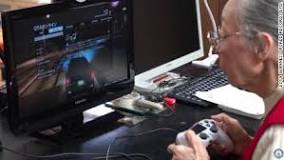 A Japanese woman has recently managed to build an online cult following her video game skills on her YouTube channel. What’s so fascinating about this? She’s the world’s oldest gaming YouTuber at 90 years old.

Most grandmas, especially those that are pass their golden years and are approaching 80-90 years old usually spend their time relaxing and generally just enjoying the simplicity of life. Some cook for their grandchildren, some knit while some are perfectly content sitting in rocking chairs and watching their favorite TV shows.

Not Hamako Mori, however, because the 90-year-old grandma has managed to create a cult following her by being the world’s oldest gaming YouTuber. Yes, you read that right.

Known as “gamer grandma” (naturally), Mori has managed to amass some 250,000 YouTube subscribers since she started her channel back in 2015. Since then, she has managed to post up to four videos on a monthly basis. However, she’s been gaming for way longer because she started playing them some 39 years ago.

II – Have Your Say
1. Brain exercise is as important as physical exercise for aging adults and seniors. Some studies suggest that some video games can provide brain stimulation. What do you think about video games? What video games do you play?
2. Traditionally, how do elderly people in your country spend their time? In contrast to that, what do elderly people do these days?
3. In the near / far future, when it is your time to retire, what things would you want to do to keep your physical and mental health in good condition?

317 AI, eel production and cancer prevention drugs in the cards

Japan expects to make commercially available the mass production of Japanese eels, an endangered species in the coun...

At Sakuragaoka Cafe, customers can get up close and personal with Sakura and Chocolat, two goats belonging to cafe...

092 The 10 Most Valuable Brands in the World

In Michigan, legislators are mulling over a plan intended to increase the number of CPR-trained members in their com...

Presidents Daniel Ortega of Nicaragua and Nicolas Maduro of Venezuela said Friday they were willing to grant asylum...
740 Why You Should Drink Milk Before Hitting The Sack
742 Tom Cruise, NASA, SpaceX To Shoot An Action Movie In Space
Home
Speech Materals