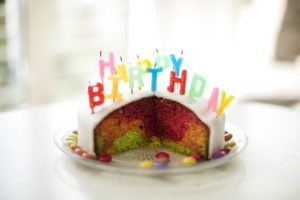 The ancient Egyptians are credited with “inventing” the celebration of birthdays. They believed when pharaohs were crowned, they became gods, so their coronation day was a pretty big deal. That was their “birth” as a god.

Ancient Greeks borrowed the tradition but rightfully realized that a dessert would make the celebration all the more meaningful. So they baked moon-shaped cakes to offer up to Artemis, goddess of the moon, as a tribute. They decorated them with lit candles to make the cakes shine like the moon. Hence, the reason we light our birthday cakes on fire.

I – Word Understanding
Pharaoh – a ruler of ancient Egypt
Tribute – a gift or service showing respect, gratitude, or affection

II – Have Your Say
1, In your country, what occasions usually call for a cake? What types are popular and which one is your favorite?
2, Traditionally, how do people (in your country) celebrate birthdays and what food/dishes are mostly served in your country?
3, Describe your dream birthday celebration.
4, What do you know about ancient Egypt and ancient Greek?

When a child is scared of dogs, strangers or grandma's creepy basement, it's natural for a parent to shield him or ...

A banana-killing disease is spreading across the world and threatening to wipe out commercial production of the frui...

646 6 Sneaky Stress Triggers and What to Do About Them

Sneaky tension triggers might be pushing you to the breaking point—without your even realizing it. Layoffs at wor...

Many aspects of life will likely never return to normal after COVID-19, but here's how flying will be changed foreve...

419 Are you smart enough to get into Mensa? These are the questions you’ll have to answer to get invited

The IQ society was founded in 1946 in Oxford, England, by Roland Berrill and Lancelot Lionel Ware. Its mission i...

Thanks to man’s ever curious mind and penchant for always trying new things, each year always comes with new food tr...
757 Inside the multibillion dollar race for a Covid-19 vaccine
759 Florida mosquitoes: 750 million genetically modified insects to be released
Home
Speech Materals